A thousand years ago the Japanese poet Kamo no Chōmei described a great earthquake that made mountains crumble and the sea spill over the land. The destruction was awful, but life went on. And so it has after the Tōhoku Pacific Earthquake of March 2011, which started the disastrous tsunami and the meltdown at Fukushima Daiichi. Billy and his friend Martin had planned to visit Japan that March. They went the following year instead. Billy took these photographs and sent them to me to make of them what I could, as I had with his photos from London in 2010. This one shows the main approach to the Temple of Kannon in Tokyo’s Asakusa district, and shops along the way to the temple. The people in the photograph are looking around or absorbed in conversations. One man on the left is making like a hard-ass because he sees that Billy is taking his picture. 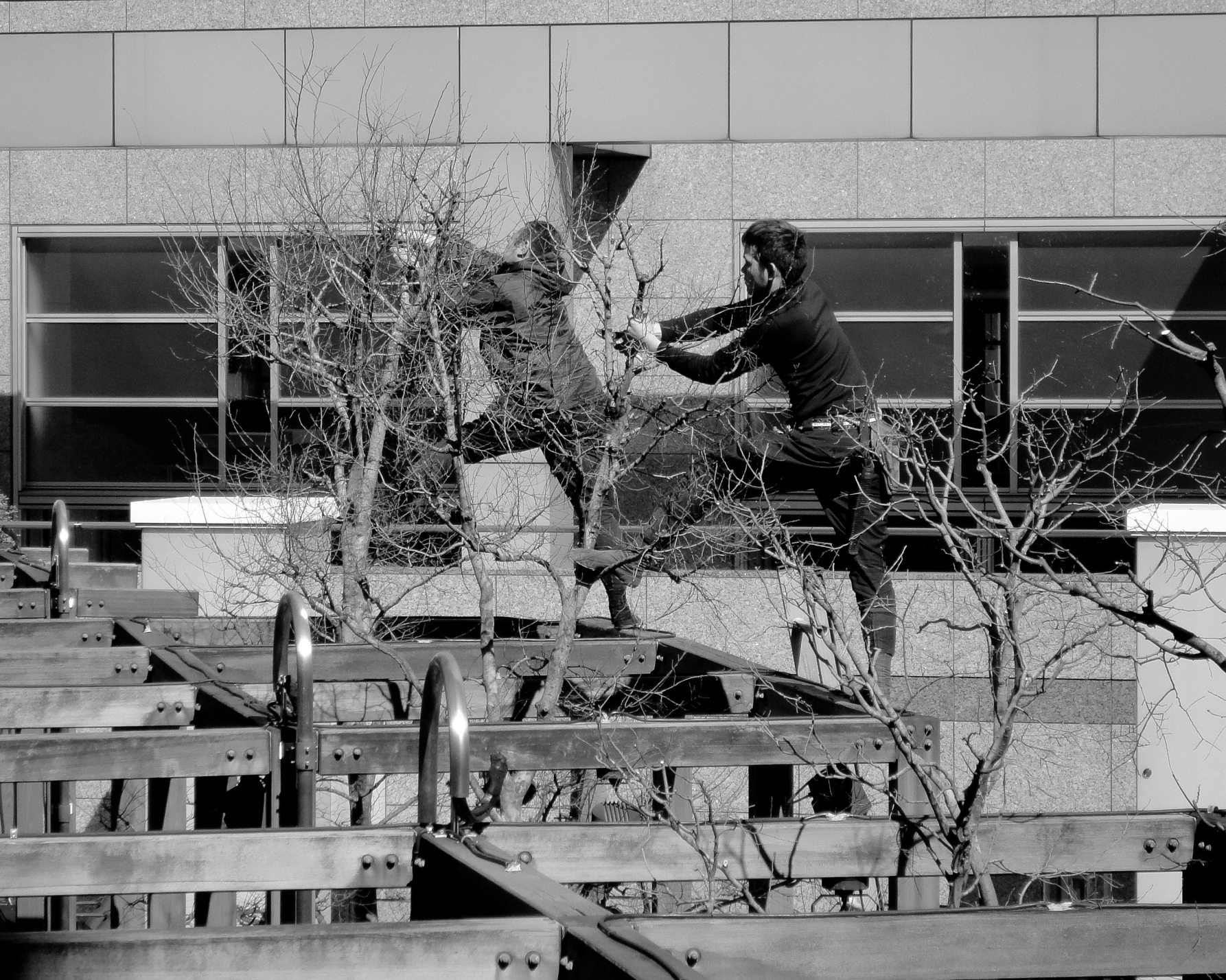 Billy photographed this strange ballet as he and Martin wandered the streets of Tokyo in search of a flea market, which seems a very American thing to do. Many streets in Tokyo have their trees trimmed like this. The Japanese call it niwaki.

Yasuhara Teishitsu is a 17th-century poet who spent his lifetime composing poetry. He destroyed all but three of his poems, three haiku, nine lines in all. The master of haiku, Matsuo Bashō, considered one of them the finest haiku of all. It goes like this:

The poem celebrates the experience of seeing Mount Yoshino, famous for its flowering trees, sakura as they are called. You have heard about cherry blossoms and the Japanese, I’m sure. It can be roughly translated as follows: “Oh this! This! Beyond words: Mount Yoshino.” A photograph is a kind of translation.  Every old man knows that.

What is it that the young man sees in the garden after he puts his camera down? Nothing he recognizes. But he is thinking. “Oh this!” can never be “Oh, that.” “Oh, that” sounds like something an American would say. As Yoshido Kenkō says in Essays in Idleness, writing is a foolish diversion.

This is Billy’s friend Martin standing on an elevated train platform, with Tokyo below him. His head is bigger than the buildings! That is a lesson in perspective, though not a Japanese lesson. Martin knows a lot about Japan, and he was a big part of the reason Billy was in Japan. He is not looking at the street that we see in the picture but at something outside the frame. He is taking it all in. 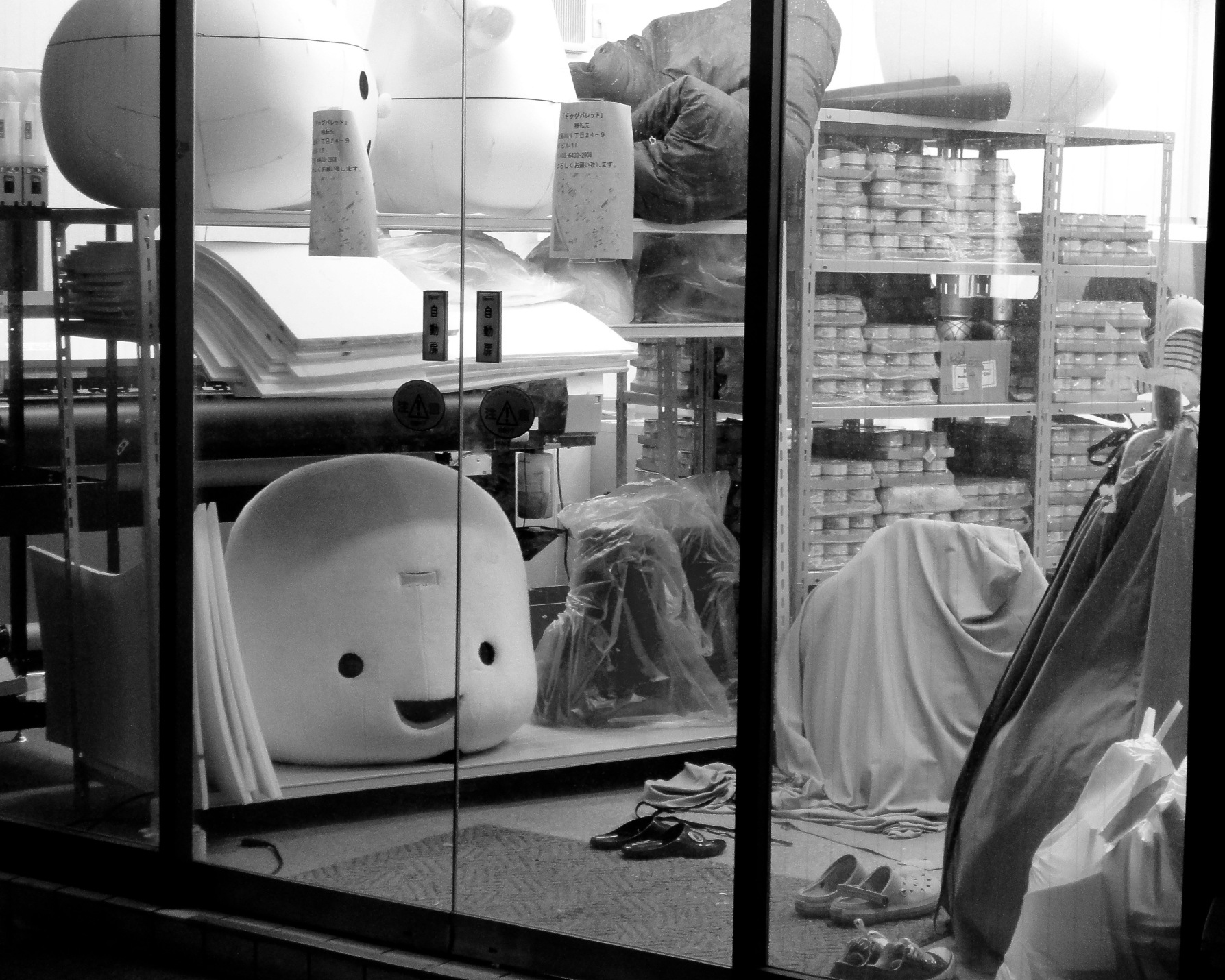 One evening Billy and Martin walked past this little shop in the Kitashinagawa area. I wish I could say what kind of shop it is: Billy doesn’t know. The shelves on the right are stacked with cat food, he says. The plastic faces are a little scary, whatever they are, though not as scary as Nōh masks. Do they have something to do with Hello Kitty? That would make sense in a cat shop. The Japanese hold cats in high regard. Along with Hello Kitty they have the Beckoning Cat (maneki-neko) and cat cafés where you can pay to hang out with cats for an hour or two. There is also Sōseki Natsume’s satire of academic life, Wagahai wa neko de aru, which is called I Am a Cat in English. But the Japanese are no more cat-like than I am.

This is the Zojoji Temple beside the Tokyo Tower. I want to speak of the piazza, too, though that wouldn’t be right. Once again Billy has captured people looking at the same thing at the same time. They are looking at the temple; it is the obvious thing. One of them is photographing it. This is a major temple, associated with Jodo Shu, the Pure Land sect of Buddhism, the most widely practiced form of Buddhism in Japan. Military and official people belong to this sect. The Tokyo Tower is a knock-off of the Eiffel Tower and famous for its height (it is the second tallest building in Japan) and color (international orange). But mostly it interests me because it is near the temple. That’s the way it is with modernism. 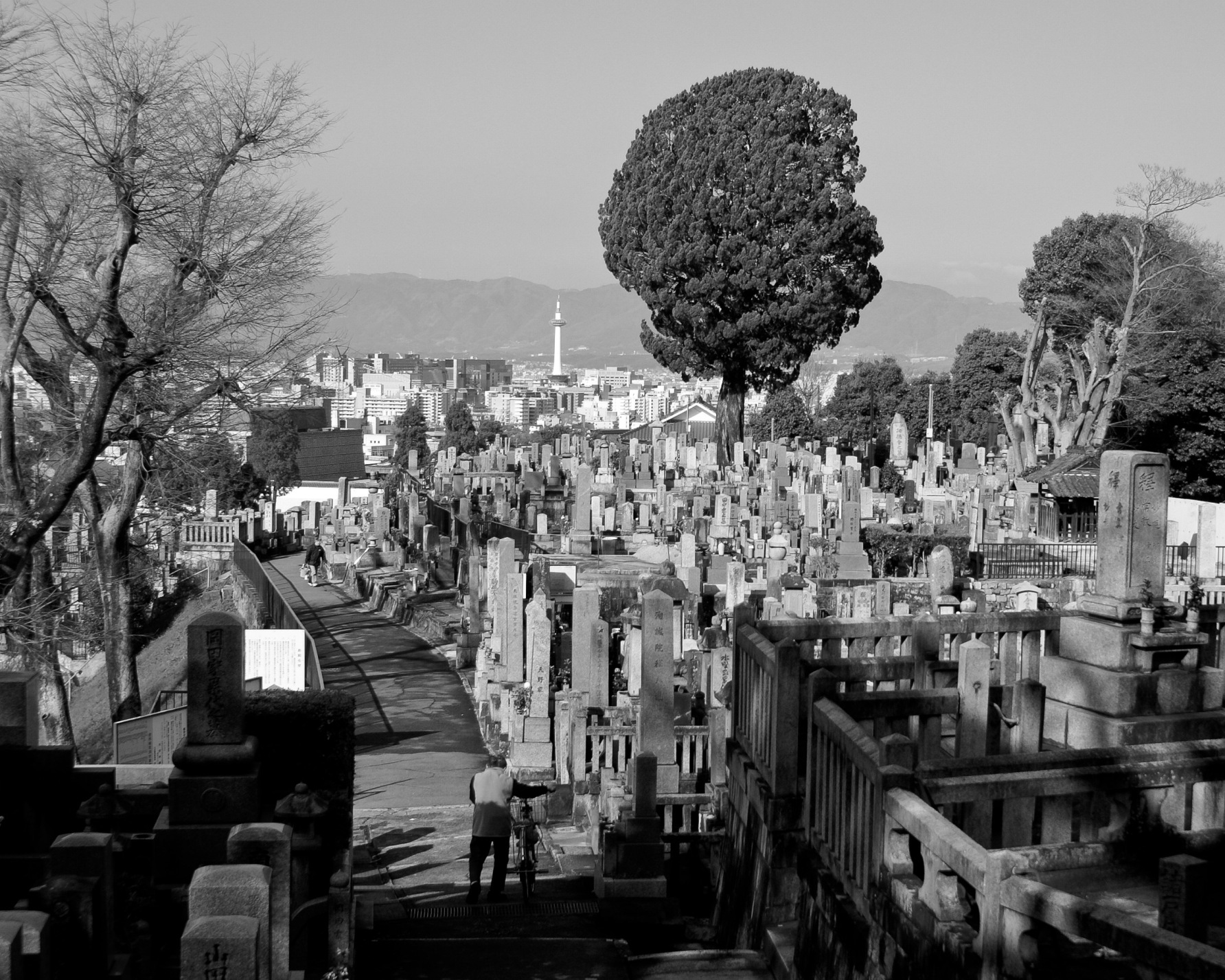 This is the first photograph taken in Kyoto, the old imperial capital spared American bombs in World War II because of its 1600 Buddhist temples and 400 Shinto shrines. The hilltop cemetery pictured is attached to the temple called Kiyomizu-dera, kiyomizu meaning “clear water”: the Otawa fountain is at the site. Sometimes Americans find the Japanese to be reserved and unemotional, but they’re not. Consider the status of cemeteries in Japan. In Japan, space is at a premium, and funeral costs are many times those in America. Families who cannot afford to purchase graves lease lockers for their cremated remains. These costs are not easy to bear, but many find a way to pay them. This contrasts with the situation in our country, where some people have a family plot where cremated remains could be buried but prefer to scatter their loved one somewhere else. Often they pollute a mountain stream.

Billy often photographs other photographers. This is a gesture of solidarity or irony–I am never sure which. In this picture he’s caught two monks with expensive cameras. One monk seems to be adjusting his settings while the other is wondering if it is raining hard enough to make him open his umbrella. He looks like he is frustrated with his colleague. He is holding some kind of notecard. Perhaps the card explains the history of what his colleague is snapping: the famous Temple of the Golden Pavilion, Kinkakuji. This temple was erected in 1400, burned down by a novice monk in 1950, and later rebuilt. The monk, Hayashi Yoken, attempted suicide after setting the fire. Yukio Mishima’s great novel, The Temple of the Golden Pavilion, is based on these events. The monk with the umbrella has a skeptical look on his face, but I don’t think he’s remembering the novel. I think he’s tired of his friend wasting his time.

In this photograph Martin stands in the beautiful garden at Kinkakuji holding his umbrella. It looks to be a serviceable umbrella. Unlike the monk in the last photograph, he has decided to use it to keep off the rain. It is made of a clear plastic. We see right through it to the garden and the trees with their lovely blossoms. It is a peaceful scene, though Martin appears to be somewhat abashed to be photographed as part of it. He is doing his best to imitate a spring tulip.

This is a photograph taken one day when Billy and Martin wandered the grounds of the Imperial Palace in Tokyo looking for cherry blossoms. It is a lovely scene to have photographed, with the stream running under the stone double-bridge called Nijūbashi. You can see a photograph much like this at Wikipedia. I prefer Billy’s. It is taken closer to the bridge.

Here they are, the cherry blossoms, in a park not far from the grounds of the Imperial Palace. The bald man is athletically perched. I wish I could read the sign on the tree pointing the strolling crowds to something on the right. I’m sure it doesn’t say, “Sit over here.” I hope it doesn’t read, “Restrooms this way.”

Why is it, I wonder, that among the elderly who paint for a hobby it is landscape painting that is preferred, regardless of their nation of birth or residence? Can it really be that a preference for watercolors and landscape is as much a part of today’s Japan as it is of seaside holidays in Bar Harbor, Maine? This gentleman has an admirable posture. He holds his brush carefully.

Ah, uniforms. The Japanese word for them, I think, is seifuku. It is middle school and high school kids you see wearing them rather than younger kids. The girls wear blouses and pleated skirts that make them look like sailors. They are posing for a group photo in front of another temple in Kyoto. They are a little unruly, looking at one another rather than the camera. Good for them, I say. Japanese schoolchildren are often said to be under a lot of stress. How does one behave properly in a group photograph anyway? By looking straight ahead at the camera? But that allows the photographer to steal your soul. 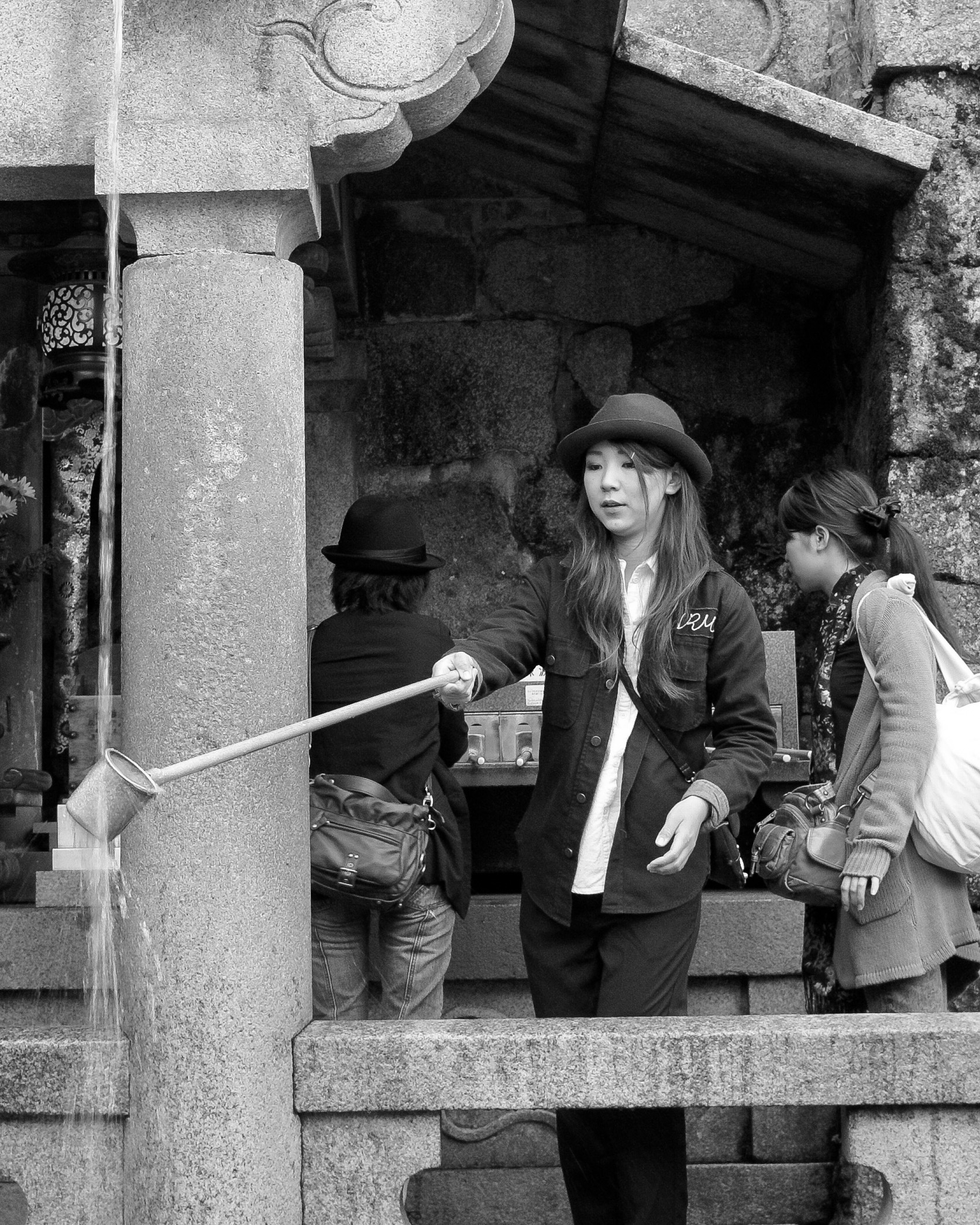 Here we are back at Kiyomizu-dera. The young woman is trying to catch water from the Otawa waterfall. If she catches it and drinks it, her wish will be granted. What do you suppose she is wishing for, wearing a hat like that?

There is a lot of Japan not pictured in these photographs. I don’t mean only the devastated areas to the northeast but also much of what I think about when I think about modern day Japan, including the techno-wizardry and toys. There’s the pocket drum and the robot butterfly, the minty insoles and the chiwawa whistle and the Buddha with the blinking eyes. Even as the Japanese economy goes into its second decade of stagnant growth I am sure that these things can be found. I would have liked to have seen some of that since I have never been to Japan to see it for myself. Que sera, sera. Instead we have this photograph of an efficient man, a temple employee, sweeping the stones with his old broom.

In studying Billy’s photographs I have noticed a number of habits and tendencies, his preferences in subject matter and so on. Crowds are among his favorite subjects, especially crowds where a child is hoisted on an adult’s shoulders in order to see something viewers of the photograph are not permitted to see. This is one of those photographs. 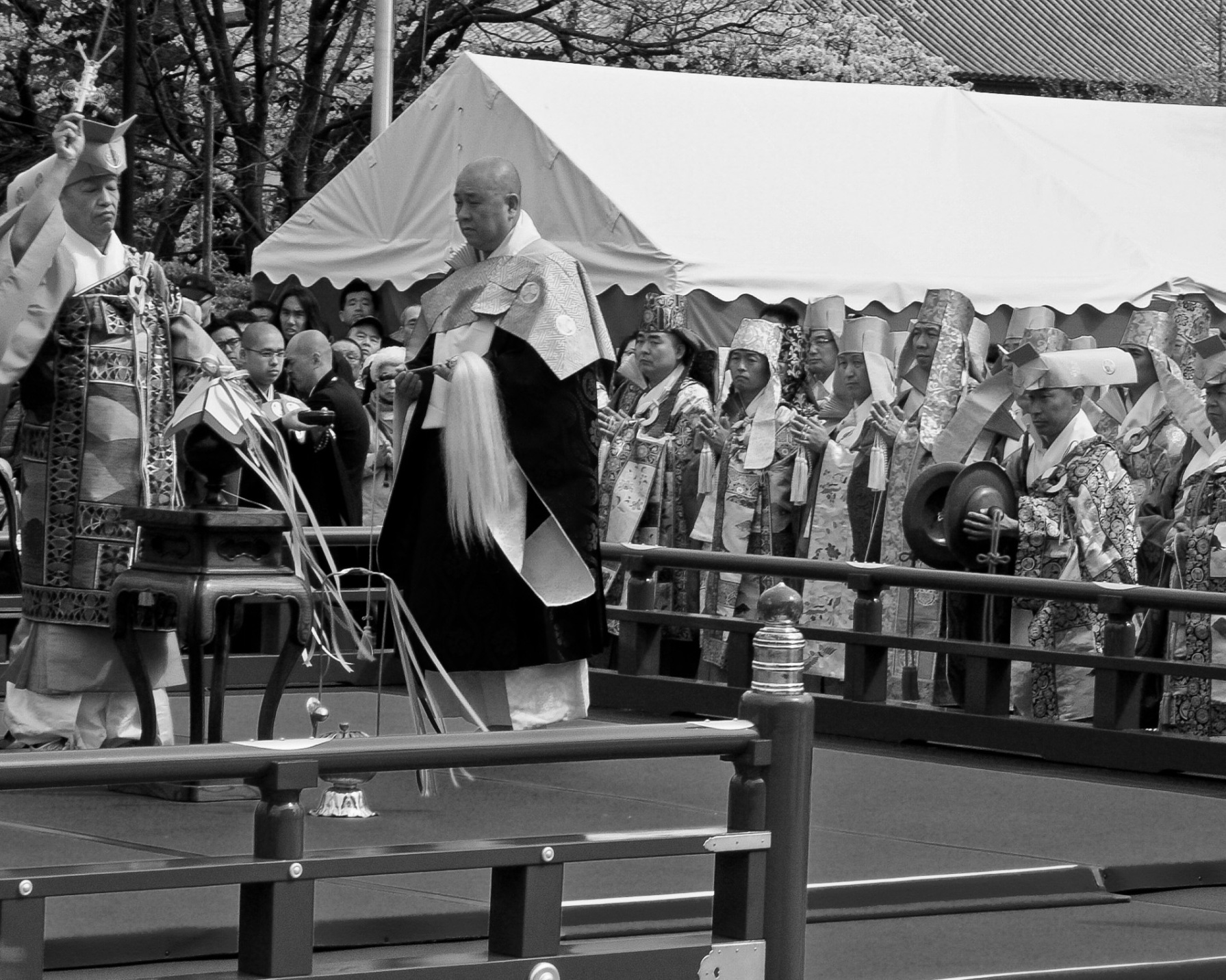 This! This, you say, is what the crowd is looking at in the last photograph. In the end all will be clear; we can hope. This is a ritual involving monks in elaborate, colorful robes appropriate for the occasion: the Buddha’s birthday. Two monks stand on an impromptu stage for the ceremony. One monk is holding something that looks like a wand. The monk in the middle wears an odd hat. It looks like a stovepipe coming out of  the back of his head. He has cymbals or an instrument that resembles them. I don’t know the name of the instrument. I must admit the limits of my knowledge. 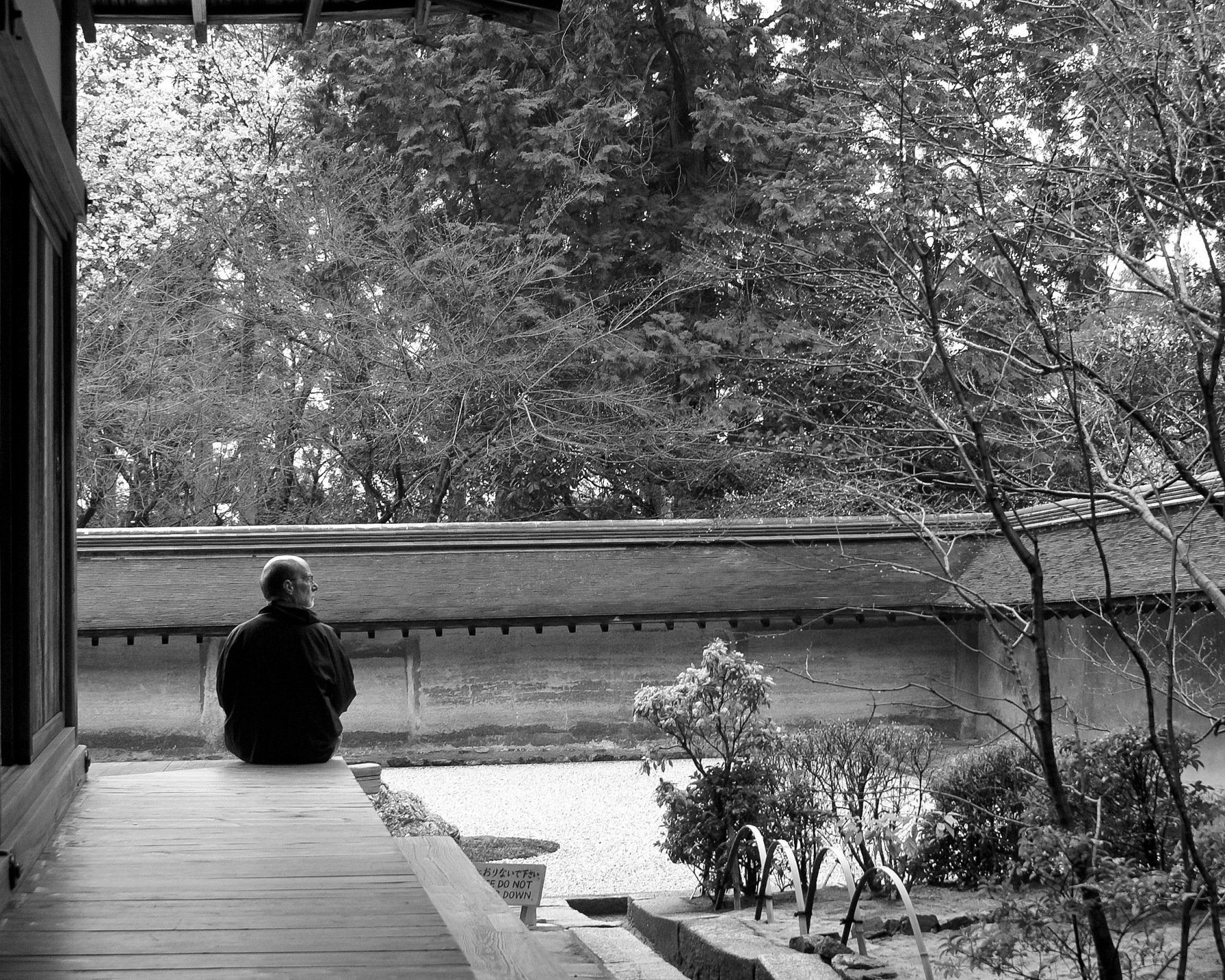 In the last photograph in this set we see Martin again, seated at the Ryōan-ji Temple in Kyoto, looking off to the right at something out of view, the famous rock garden called karesansui. This garden includes fifteen stones carefully placed by monks so that it is impossible to view all of them from one position on the veranda, where one is supposed to view them. So some of what you can’t see in this picture Martin also can’t see! But he is relaxed anyway. He has taken on the quiet of his surroundings. He is thinking what you are thinking.